2016 was a record for the number of transactions in Westchester County.  Both the 1st and 2nd quarters of 2017 exceeded the respective numbers in 2016.  The 2017 3rd quarter level of transactions dropped slightly from the 2016 numbers indicating that 2017 will not surpass last year’s volume.  2017 will finish strongly with a level of activity that will be a minimum of 5,700 sales. 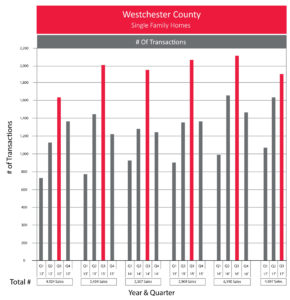 The 3rd quarter ended with 42 year to date sales of single family homes in Bronxville Village.  This is exactly the number of sales achieved for calendar year 2016.  There are currently 10 additional properties under contract indicating that 2017 volume will exceed both 2015 and 2016. 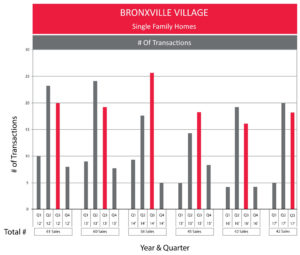 48 single family homes changed hands through the 3rd quarter in this section of Yonkers representing strong activity that we have seen for the past few years.  It appears that 2017 total activity will be greater than the previous two years but will fail to reach the record setting 2014 numbers. 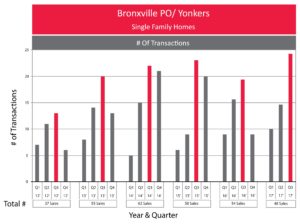 This portion of Yonkers remains sought after for its unique character and affordability.  2017 will exceed 2016 but is hampered by a lack of inventory that we see in certain markets in Southern Westchester. 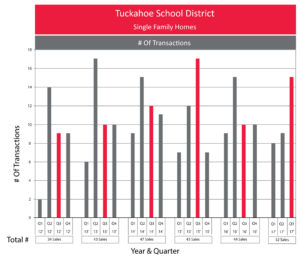 This market remains strong and is one of those that suffer from a lack of inventory.  This year’s activity will exceed both 2015 and 2016 sales but will not reach the record setting volume achieved in 2014. 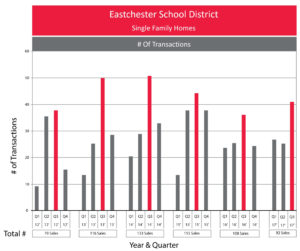 2017 will be the fifth year in a row that will achieve volume of 45-47 homes.  This amazingly consistent result is indicative of a strong market with excellent appeal to a wide range of buyers.